History of Cos Cob School

In 1756, Greenwich had nine separate school districts. Each school was governed by a school committee appointed by the church society (Congregational only at this date). Schools took care of the entire education of each child, with the pupils ranging from 7 to 20 years of age. All were instructed by one teacher and usually in one room. The scattered school districts were not brought under a central system until 1910, when a Greenwich Town School Committee was appointed with a superintendent. Cos Cob was one of the nine separate school districts.

Cos Cob School had been commissioned and was located at various sites throughout Cos Cob since 1756. In the fall of 1915, Cos Cob School opened its doors at 300 East Putnam Avenue, then called the Boston Post Road. The school’s formal opening took place on October 15, 1915, marked by an Open House and evening program. The Greenwich News and Graphic, the local newspaper, covered the occasion with the headline “School Opening Marks Epoch in Cos Cob Life--School to be Social Center for Cos Cob.” The 1915 building was built for a cost close to $100,000 on the former Young property on the Boston Post Road after consideration of other sites. 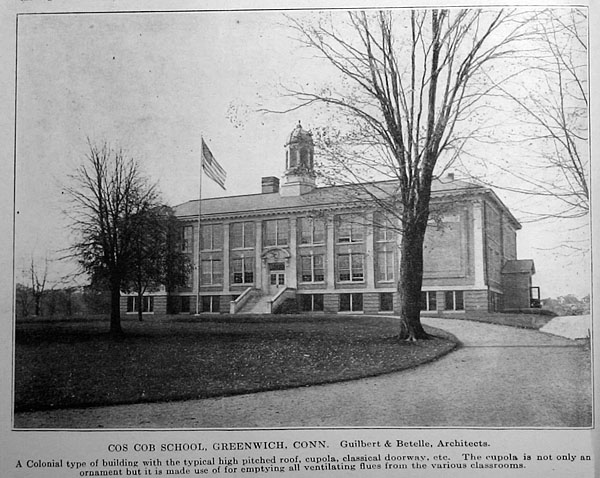 (Image source: jamesbetelle.com. Image is in the public domain.)

From 1920 to the early 1940s, Cos Cob School was designed to function as a city form of school government. This meant there were Police, Fire, Safety and Park Chiefs and Aldermen elected by each class. There was also an elected Mayor who managed the entire operation. The students ran candy and supply stores to generate funds for the school. At the end of the year, the entire school would vote on how to spend the profits. Overtime the school was modernized and additions were made to the school in 1924 and 1929. The field was added resulting in a 6.4 acre campus.

At 1:59 a.m. on July 29, 1990, a smoke detector signal alerted the central Greenwich fire station of a fire at the (75 year old) Cos Cob School. Cos Cob responded in two minutes. When the firefighters entered the building there was only moderate smoke on the third floor; in the attic, the intensity of the smoke and heat forced them to retreat. When the fire broke through the roof and the ceiling collapsed, the call was given to evacuate the building.

Two minutes after the last firefighter exited, an explosion tore through the roof and shattered all third-floor windows. With the old wood beams and the open attic, the flames spread rapidly. Now the fire could only be fought on the outside. Three aerial ladders and three deck guns poured 6,000 gallons of water per minute onto the school. It took 80 firefighters from all 6 of the town’s fire stations 6 hours to bring the fire under control.

While there were no injuries, several firefighters were treated for heat exhaustion by Greenwich Emergency Medical Services (GEMS). Police regulated the traffic on the Post Road. The Cos Cob Ladies Auxiliary, Red Cross Disaster Service, and local deli owners provided food and beverages.

Board of Education members immediately sat down to plan where to send the 274 students when the new school year began on August 30. On August 2, they approved the reopening of Parkway School and the transferring of funds for renovations. The principal scheduled a meeting for students and parents to assure them that it would be school as usual. Afterwards, students and parents were invited to meet with teachers and a social worker or psychologist to answer their questions and address any concerns. While the school had smoke detectors, it did not have a sprinkler system, nor was a sprinkler system required by law. Today, multiple-story buildings are required to have sprinklers; however, single-story structures are exempted. 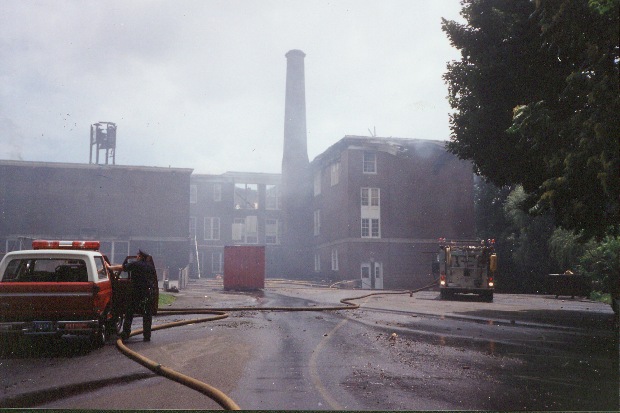 Although the fire was devastating, the manner in which the community rallied to ready Parkway School for the Cos Cob School students was nothing short of remarkable. Cos Cob residents, parents, staff, and students basically lived on Lower Cross Road in August 1990, reclaiming the land from overgrowth and the building from the ravages of several years non-use as a school. The close-knit community joyously welcomed the opening of the rebuilt Cos Cob School in the fall of 1993. Bill Young, in his article in the September 12, 1993 issue of Greenwich Time, acknowledged the spirit of the community during this period of upheaval stating, “Never underestimate the power of a Cos Cobber.” This sentiment continues to be reflected today in the Cos Cob community.

Once again Cos Cob School hosted an Open House for the community to showcase their new building. With the latest in technology, the new building included the construction of a 450-seat cafeteria/auditorium to foster the concept of a “community school.” The school’s mascot was changed to a Phoenix, the symbol of renewal. In Greek mythology, a phoenix is a long-lived bird that is cyclically regenerated or reborn. Associated with the sun, a phoenix obtains new life by arising from the ashes of its predecessor.

Today, Cos Cob School has about 400 students enrolled in grades kindergarten to grade 5. Traditions such as May Fair, Halloween Parade, Veteran’s Day Celebration, 5th Grade Play, and 5th Grade Trip to Plymouth are still celebrated, ensuring the strong connections with past generations. It is not unusual for staff to welcome a kindergarten student and to know that student’s parents, grandparents, and, in some cases, great-grandparents attended Cos Cob School. The diversity of the school reflects that of the Cos Cob neighborhood and enhances the school community and learning.

On October 6, 2018, a plumbing fixture in the second-floor art room broke, causing a water leak that ran for most of the weekend and resulting in damage to the main office, art room, the media center, and several first-floor classrooms. Students in grades 1 and 2 were relocated to Old Greenwich School while kindergarten students went to Parkway School. Students in grades 3-5 were able to stay at Cos Cob School, attending classes on the third floor.

Repairs and renovation were completed in three months and all Cos Cob students returned to Cos Cob School in early January 2019.

(1) Karen Frederick, Curator and Exhibitions Coordinator, and Anne Young, former Curator of Library and Archives, of the Greenwich Historical Society contributed to this article and co-curated the exhibition Everyday Heroes: Greenwich First Responders (September 14 through August 26, 2012) from which it is derived.